In this video, I'm talking to you about the equipment you need to start shooting your video content and getting it online, and to keep that very simple, this is what we're going to talk about here your Smartphone.

Now, maybe you're already at the point where you have a video camera and you're well versed in how to shoot and edit video, and if that is the case, this may not be super relevant to you. But I know most people are not at that point, but even if you're at that point the reality is when you need to keep things as simple as possible the more complex you make it.

This isn't like you're trying to make a commercial that you're going to put a crew into and you're gonna have all this lighting set up. You're going to do all this stuff, you're going to set it up and everything because if it requires all that, you're not going to do that every day or three times a week even or once a week, even you have to keep it simple and that's why you see a lot of people just shooting videos in their cars, it's simple, they pick up their phone they mount it on their dash mount and they go. I will encourage you to keep it that simple as well, so why do I think a smartphone is a great tool to shoot your video content with?

Well, first today's smartphones, if you still have a really old one for some reason you may not want to do it or maybe you want to find an excuse to upgrade the newer phones have 4k cameras and very high resolution, and so much about these cameras are good. Now, you might say well, Craig, I have a webcam, I'm going to use my webcam. My advice to you would be, use this instead of your webcam and the reason for that is, webcams are just notoriously bad quality even when you buy a good one, the quality usually isn't that great and you're going to find in these smartphones.

The other thing about webcams is when you shoot your video with a webcam, the only lighting you usually have is your computer and the lighting that comes from your computer is like it's a very hazy kind of blue light and we all know what it is like anytime you see somebody with that shade of light and it's just not a very pleasant shade of light or color temperature. So, I don't really recommend it but if that's all you got and that's what you really want to do, then, of course, use your webcam for starters. Do whatever is easiest for you and whatever you will do.

My recommendation would be if you're going to choose between a webcam and a smartphone, use a smartphone.

Three tips for using your smartphone that I have for you:

I have lights here this is my little home office/studio and I have lights in here. I'll show you what happens when I turn my lights down. This is what happens, this is what this video might look like if I did not have any lights going. Obviously, this is a dark room. I don't have any of the lights on but this gives you an idea of what a difference lights make to a video if you don't understand this yet, lighting is everything when it comes to video lighting and audio, they're even more important than your camera.

You say, Craig, I don't have lights like I don't have anything. I don't know what to do. My best advice is to go stand in front of a window, hold your phone up or get a tripod or get a little a joby pod like this guy, it has a mount on it. You can put your camera on and it, it can go anywhere and it can wrap around things and connect to things. You can get a little tripod like that and put your camera up and let the sun you have to let the daylight, light you through the window.

I don't recommend going outside because when you go outside, if you go at the wrong time of the day, the sun can be really harsh but the brilliant thing about standing in front of a window is the lights going to be diffused by the window itself and it's going to give you a nice even light that's not too harsh and that's not going to with light or overexpose your face with light so that's my recommendation if you're just getting going. Maybe you have and of course, you can use that as well.

I'm assuming you're just starting out, you don't have a microphone and I'm going to be talking to you about that and everything, what I recommend in the meantime, is that when you shoot with your camera you have it about this far from your face the front-facing cameras on most smartphones have a wider angle lens. So obviously, you know people are doing selfies and you can hold your phone at about this distance and you can also use a tripod or one of these little gorilla pods and I would recommend using so you're not having to hold it and it's shaky and if you hold it this far from your face you're going to get reasonably decent audio.

Now, if you set your smartphone up on a tripod and it's across the room, you're not going to get good audio because the phone's going to pick up more noise from the room than it is from you. But if it's really close to you, it's the audio processors in these devices know to hone in on the voice that's closest. So, don't keep it so far away from you.

A good way to illustrate all of this is, are these videos people make of themselves in their cars, right? You see it all the time. Well, think about it. One, they're in a quiet space, they're in an insulated quiet space. There are no walls for the sound to bounce off. Two, they're in a place with windows all around them, so the light is being diffused by the windows, and three, they have their phone because most people already have a phone mount. They already have stabilization, they already have their phone stabilized where they don't have to hold it and talk to it. Four, the phone is not far away, so even though the phone is close enough, it's going to pick up the audio really well.

I don't think most people realize why they make videos in their cars, I think a lot of people do it because they saw other people do it and they thought it was a good idea but these are the principles that make it a good idea, so I'm going to roll that back I don't think shooting in your car is the best idea I think taking the principles from it in finding a better spot that's more interesting that just adds more interest and value to your shot, is a better choice in the long run. But, if starting with your car is your choice, it's a perfectly great choice to get a good shot, good audio, and good lighting with your video and finally editing your video.

If you shoot it on your smartphone there's some really easy app, there's an adobe rush, there's imovie on the iphone, because all you're wanting to do, is cut your video up or cut out stuff that doesn't work. And of course, you can use Clipscribe as well, which makes it really easy because you can cut stuff out based on what you say, instead of what you see and having to use timelines and splices and all that stuff. You can literally just turn off the things that you don't want to say, but it is advantageous to be able to cut your video up.

The final thing I'm going to say about that is, there's a phrase that we have in the video world which is  "Fix it in Post."  You'll hear that a lot. What that means is, when you shoot a video, if you make a mistake, you tell whoever the editor is, to "Fix it in Post." But you want to avoid that at all costs. It's very difficult or it's much more difficult to fix things afterward, so try to get your audio and your video, right.

Try to get it in as close to one take as you can, and then you won't have to worry about all the drama of trying to fix things later on.

Alright, everyone, if you have questions, let me know. I've got another video coming for you tomorrow, I will see you on that video that's going to help you out a lot creating video content. 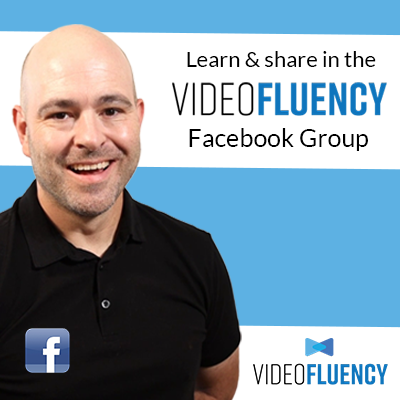